Addenda (if any) to solicitation

Former Chairman of XBRL US

Invitation to the City of Tracy
Helping to make construction of the western business parks, including Lammers Road, a national model for Smart Buildings, Smart Infrastructure and the Smart Grid for sustainable development, energy efficiency and compliance with regulatory requirements by leveraging data interoperability though collaboration.

Local governments play a critical role in helping California meet its energy and climate goals. They have a unique connection with their constituents and jurisdictions over building and land use decisions. Many local governments have developed long term plans to address energy and climate issues. In fact, 42% of local governments in California have a climate, energy, or sustainability plan to address greenhouse gas (GHG) emissions. The climate action plans propose individual solutions to match the community’s values, and engage and mobilize the public.

PURPOSE OF SOLICITATION
This is a competitive grant solicitation. The Energy Commission’s Challenge program announces the availability to local governments of up to $10.2 million in grant funds for projects that stimulate innovation in building energy efficiency and developing or implementing climate action plans. 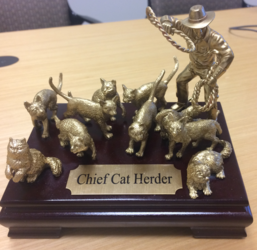 FEDERAL AND STATE LAWS, REGULATIONS, AND GUIDELINES
Applicants responding to this solicitation may want to familiarize themselves with the following documents:

CalEnviroScreen web-based mapping application and information on the definition of disadvantaged communities can be viewed at: www.oehha.ca.gov/ej/ces2.html

Leverage the DATA Act and XBRL/FIBO, along with the DOE Orange Button, to promote efficient building and maintenance of the nation’s energy infrastructure by enabling data interoperability to streamline the procurement/development process and improve the operational phase through predictive analytics to improve project bankability regardless of the size of each individual project.

Incentivize private entities and financial markets to adopt strategies to exploit the functionality enabled by DATA Act, XBRL/FIBO and the resulting data interoperability.

Demonstrate how multi industry data interoperability synergized around XBRL/FIBO will have a positive impact on the largest energy and transportation projects undertaken by the biggest contractors, but more importantly create a significant and material impact on small and local businesses where the efficiencies generate the greatest impact.

Demonstrate how data interoperability will enable small local small business to participate in the all the new opportunities, with an emphasis for veteran owned companies.

The objective of the XBRL-CET/SGIP PAP25 working groups, and my role as Co-Chair - SGIP/SEIA DOE Orange Button - Finance Subcommittee, is to encourage collaboration and facilitate the development of multi-industry data standards for establishing data interoperability to implement greater efficiencies in the construction/operation of energy and transportation projects, and to enable data analytics for improved risk management to promote innovative ways to provide financial, surety and insurance products and services more streamlined and price competitive as an intended byproduct of regulatory compliance.

The main premise is that too many standards are developed in a silo and dedicated to a specific industry that creates barriers to wider adoption, and prevents financial markets from developing data interoperability.

We challenge the silo approach by demonstrating through Zero Cost Proposals how just two data sets, the Chico Common App for the company profile data set and the IEC data set for solar/energy storage performance, can have multi-industry, multi-stakeholder applicability and provide a foundation of data interoperability that can be replicated for the many data sets that will follow.

What their respective systems do with the data is subject to the stakeholder needs.  Getting the required information easily and securely is the first step.

In response to the January 6th California Energy Commission announcement the CBR team would like to invite you to an initial webinar to meet our team and discuss how we can work together to prepare your city to meet its energy benchmarking requirements and develop a strategic climate action plan.

The Goals: The “Local Government Challenge” provides financial support so that your city can work with our world-class team to jumpstart your climate action and energy benchmarking programs at no direct cost to you. The proposal deadline is March 6, 2017, and our team is seeking a group of 3-5 city partners to apply a framework that we’ve developed side-by-side with city teams and successfully deployed across the United States. Through this collaboration, we will help you to automate your building energy data collection, validation, analysis, and reporting efforts (for AB802) and leverage that data to create and manage your customized climate action plan.

Our team: For over 3 years, our team has worked together to incorporate best practices from cities around the country into the CBR framework, which enables your city to get the most impact from its sustainability program at minimum cost and time based on a strategic approach to energy management. The CBR staff consists of highly experienced professionals with the range of skills required to launch (or fine tune) your city benchmarking and climate action programs.

Rep. Darrell Issa introduces the DATA Act in the House of Representatives.

Sen. Mark Warner introduces the DATA Act in the Senate.

The Senate passes the DATA Act.

The House passes the DATA Act.

The XBRL Work on Hand Report incorporated into FIBO

First in a series of articles on the value of data for the construction industry.  ​Link to all articles

Baseline to Build On

Initiative to develop a data standard for construction

XBRL US is hosting a surety webinar - Standards to Automate Processing for Contractors, Agents & Sureties

Working Together to Make California Healthy and Sustainable
Friday February 10, 2017 ​

Our submission was disqualified due to many of our collaborators being from out of state.

The process of preparing the submission was very productive, and created the conceptual foundation for the On Bill Finance project and other concepts.

The submission is in, and the review process by the California Energy Commission will go through mid April.

The City of Chico, and other invited cities, will have the nations top energy data experts (scroll down) supporting the city as it works to comply with AB802 and SB350 while promoting energy efficiency and solar development in their city

The resulting prototype Salesforce apps will not only be an excellent educational opportunity for students interested in STEM, combating climate change and promoting solar, the freely distributed shareware apps will be a catalyst for innovation in the energy and transportation sectors and the financial markets that are active in those industries.

During this review process we are reaching out to all those that are interested in the project and invite their participation.

We are looking for:

Public entities that want to learn about administering projects using XBRL/FIBO for compliance with the DATA Act while helping small business.

Contractor trade associations that want to educate their membership on emerging use of data standards.

Contractors, and construction industry software vendors that want to incorporate data interoperability into their applications.

Bank, surety and insurance systems that want to incorporate data interoperability into their systems for enabling data analytics. 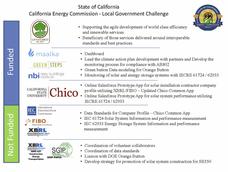